Just for fun really, I thought I would see what is possible…. what kind of lovely dessert could I create with less than 100 calories? 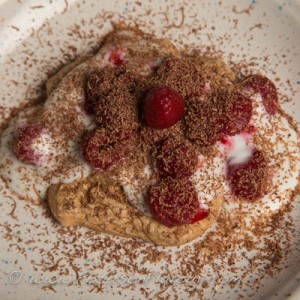 I used 2 egg whites and only 30g golden sugar, making 4 sticky meringues (I don’t think you can make a crisp meringue with so little sugar). I followed Nigel’s method for making the meringues. Topped with fromage frais and defrosted raspberries and sprinkled with grated chocolate. ONLY 75 calories each!!!  Yummy.

or how about this, a recipe I found in Australian Women’s Weekly Healthy Heart cookbook :-  Mini Eclairs with Vanilla Cream 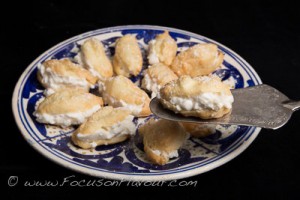 Basically a very light choux pastry, filled with low-fat vanilla flavoured yogurt that has been thickened up using gelatine.  Dusted with icing sugar. Less than 50 calories each!  (You would want to eat at least 2….).

So you really can eat dessert completely guilt-free! 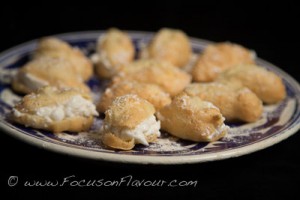