I’ve been having fun with my meal plan – turning dreams into reality….well at least, giving form to ideas and trying to make our meals both visually appealing and tasty. I find it really helps to have a plan to work to, even if I adjust my ideas a little as I go along.

For Tuesday lunch, the plan said ‘raw vegetable salad’ for lunch. A lot of possible interpretations of that. So I decided to go for a colour theme, which was Red, White and Green. 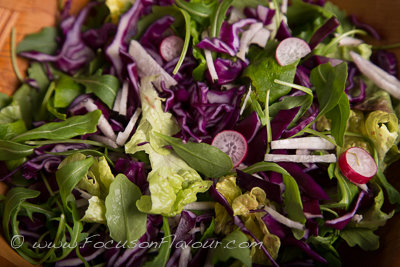 Red Cabbage, with Oak Leaf Lettuce, Rocket and two kinds of Radishes – red and black made up my first salad. The little slivers of black radish, which is pure white inside, could be replaced with celeriac or turnip. This was dressed with my usual vinaigrette based on walnut and balsamic vinegars and olive oil. 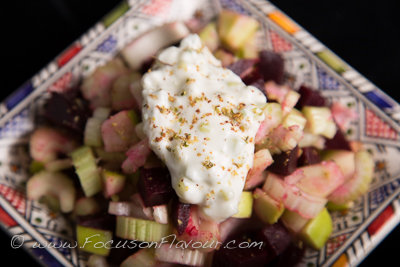 The second one is what my mother would have called ‘Winter Salad’ – cooked beetroot, apple and celery. I topped it with the last of the Tsatsiki and sprinkled it with Za’atar. I must make some more of that, it has been useful in so many different dishes!  More on that in a moment. 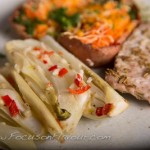 dinner, I followed an idea from Mimi Spencer’s book “the fast diet recipe book“, rubbing crushed fennel seeds into some pork, which is sealed over a high heat, and then set aside. In the juices (or in a little olive oil if you aren’t using meat), gently sauté some chopped garlic and red chilli. Add 200ml of stock, some grated lemon zest, seasoning and a little lemon juice and pour over quartered fennel bulbs in a baking dish. Top with the pork and bake in a hot oven for 15 to 20 minutes, covering with foil for the latter part of the cooking to keep the meat moist. I can imagine working this in several different ways, with tofu or fish, perhaps using capers and/or fresh herbs. 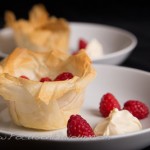 For dessert, I made filo cups – just one sheet of filo is enough to make two cups. Cut the sheet into quarters, brush lightly with melted butter, and lay two pieces on top of each other at angles and press into a ramekin. I used another smaller ramekin inside to help hold the shape, but I think it could work without.

Bake for about 8 minutes, until they start to turn golden, then remove and allow to cool. 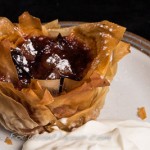 I filled them with a spoonful of lemon curd and topped it with (defrosted) rasperries, but this is another idea which can take so many different fillings, such as poached plums with ginger, see left  (as in 5:2 Healthy Eating for Life).
I think especially when you are having a low carb meal, having something that is light and crispy can make a big difference to enjoyment. Only 41 calories and 8g of carbs for the pastry, plus another perhaps 20 calories for the butter. Fill it with thick greek yogurt and fresh berries for a delectable low calorie treat. 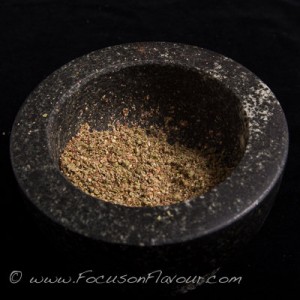 I have come across a lot of recipes calling for the use of Za’atar, but it was impossible to find locally. What surprised me was that despite it being frequently mentioned in books, none of the ones on my shelf had a recipe for it. Thanks to Google, I discovered that it only has 4 or 5 ingredients, so I resolved to make my own.

I found the Sumac in Cahors at Les Cafes Lebert, where they have a fabulous selection of world foods. The oregano came back with me from Greece and the thyme was a gift gathered by a friend who visited Provence. I do tend to look out for freshly dried herbs, if you know what I mean, rather than those rather dusty looking ones in little jars.

And here is my recipe for Za’atar

Grind all together and store in an airtight jar.

You will find lots of recipes that use Za’atar, particularly those by Ottolenghi. I love his baked aubergine recipe, which I top with greek yogurt and za’atar and sprinkle with pomegranate seeds. 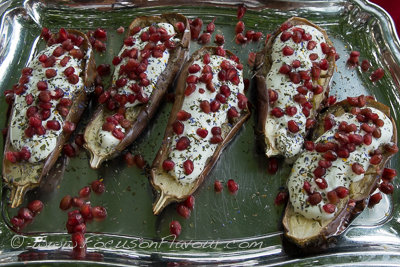 I love it sprinkled on flatbread before baking (also works well to dip bread into, along with olive oil and balsamic vinegar), but also over dips and roasted vegetables. It reminds me of gomasio, the Japanese / macrobiotic condiment of crushed sesame seeds and salt; but the herbs, especially the lemony bitterness of the sumac, add another dimension and make it a versatile and more-ish choice for livening up simple vegetables.