It’s time to deal with the remnants of the turkey. It was delicious, the best we have had in years – many thanks to Domaine du Merchien, who raised it lovingly and organically. The flavour is almost sweet – perhaps as a result of grazing on grapes….

A turkey is an expensive treat and I don’t want to waste a scrap of it. So whilst the remaining meat will be turned into Turkey, Ham and Leek Flan, Turkey and Mushroom Pie, Turkey Curry, Turkey Risotto etc, the carcass will form the basis of a stock that will be the basis of many soups to come. I have re-kindled my love of soup since we started intermittent fasting. There is nothing I like better to break my fast with than a bowl of soup. From the simplest of vegetable soups to those zingy with spices, unctuously creamy, thick with pulses or enriched with ground nuts. 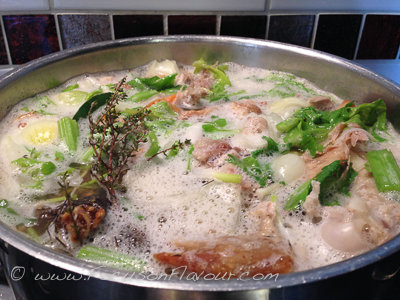 Just as it is starting to bubble and come to the boil, turn it down to the lowest possible setting, then cover

So the carcass and all the scraps of skin and bits of stuffing are broken up and put in my largest saucepan. Along with a chopped carrot, some celery stalks, a couple of small onions cut in quarters, a dozen peppercorns, 2 bay leaves, a large sprig of thyme and a generous pinch of salt. Bring to the boil and immediately turn down to the lowest possible setting, cover and leave for a couple of hours. In particular, avoid boiling it or simmering too fast, as that seems to bring out a flavour of bone, rather than the rich, sweet flavour of the turkey. Then I will strain it (the veggie bits go to feed the chickens, any scraps of meat will be a treat for the pussy cats) and return the liquid to a clean pan, to boil fast and reduce to a manageable quantity. This can then be portioned up and frozen for use later. I do exactly the same sort of thing when we have a roast chicken.

We also had a small joint of smoked gammon, which I boiled and then baked in the oven. I saved the water from the boiling to use to flavour one of my all time favourite soups, Pea and Ham. Any scraps of ham will come into their own with that one. The split peas are simmering as I write….

So as we move into what may turn out to be a frugal year, I am intent on making the most of all the ingredients at my disposal to add that all important element – flavour. Scraps of vegetables and their peelings, leaves from celery, herbs and spices, bones – these can help transform a simple soup into something special. So when I can, I will – make stock!

1 thought on “In praise of stock…”