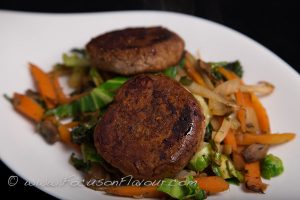 I was surprised to realise that I hadn’t written up this recipe before now! Buckwheat is a fantastic whole food, a seed rather than a grain, and good for people who are trying to avoid gluten. As well as being rich in complex carbohydrates, it is also a useful protein source, and as we are trying to encourage each other to include more plant-based protein in our diet, this is a great food to discover, if you aren’t already familiar with it.

Buckwheat burgers are simple to make, cheap and delicious to eat. They make a great vegan fast day meal. They are splendid stuffed into a piece of pita bread, with or without salad, tomato sauce or whatever other dressings you may fancy. They help to keep you warm all day in winter if you have one for breakfast. Try one with a fried egg, mushrooms and toast! Or have one or two for an evening meal with rice and vegetables.

Mostly, buckwheat gets used as a flour here in France, to make galettes de Sarrasin. You may also come across it as soba noodles. Although it is also called blé noir (black wheat) it is not related to wheat at all.

But I am not going to use flour, I am going to start with whole buckwheat groats. 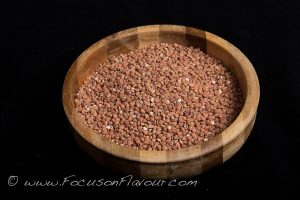 These ones are already roasted (kasha grillé), but if yours are not, they can be easily toasted in a dry frying pan over medium heat. Keep shaking the pan so that the groats move around and get evenly heated and just start to turn a little darker. This improves the flavour.

Then they need to be roughly ground. The easiest way to do this is in a food processer, blender or grinder, but I guess you could do them in a pestle and mortar for you arm exercises…. You want to have some texture, not create a fine flour. A few pulses in a good blender will suffice. 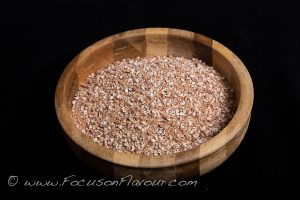 Next, put into a bowl and add boiling water and mix with a fork, until the mixture holds together. If it is too dry, it will be crumbly. 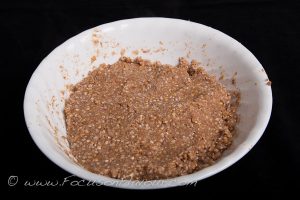 Cover and leave this to rest for a few minutes, to cool and absorb the moisture. Then form into a smooth ball, adding a little more water if necessary.

Put onto a floured board (using some buckwheat or wholewheat flour) and roll into a fat sausage shape. 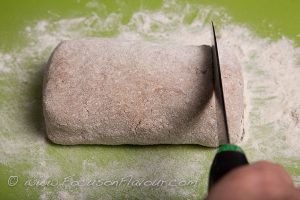 Slice into 8 rounds, about 1cm thick, dusting with flour as you make them. 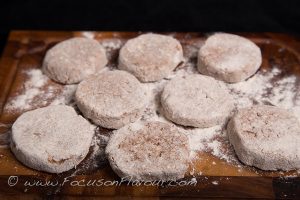 These are then fried in a little oil until nicely browned on both sides. Then pour some tamari soy sauce into the pan and let them sizzle, flipping them over and adding a little more tamari if needed. This gives the crust a lovely savoury flavour. 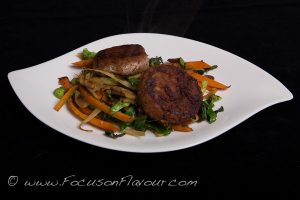 A super vegan low calorie meal, suitable for a 5:2 fast day: 2 burgers and a heap of stir fried veggies will be less than 300 calories. Include some chopped nuts, sunflower or sesame seeds or a tahini dressing to increase the protein content.

You can freeze them uncooked – open freeze and then wrap individually. Defrost before cooking.

Really, very little effort and it is hard to figure out why they aren’t better known! I think this way of making them is much more successful and tasty than boiling the grains, or pre-soaking them.